As mentioned in a previous post this evening was a different take on our regular meet ups with friends.  I had decided to take the games playing to a new level and create a friendly championship. I also used the night as an excuse to introduce our favourite games to a wider audience.

Firstly, you cant have a championship without a trophy so I spent a weekend with my FiL and created this: 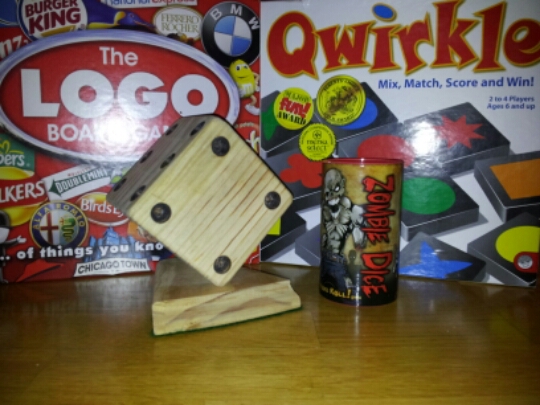 The trophy was made from a piece of fence post, and constructed in the FiL’s garage over the New Year break!

In the balance fairness FiL also made this for the lowest non winner: 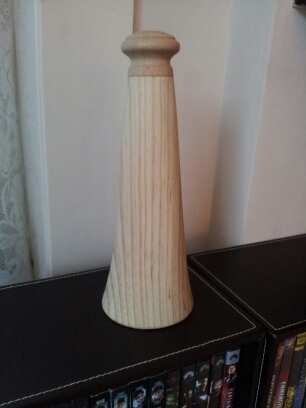 The lowests scoring non winner was to receive a Ludo piece constructed from the same fence post as the die.

The rules for the evening were simple:
1. Each couple was to bring a game.
2. The evening was mainly about fun and not serious.

Mr P and Mrs H supplied What Am I Logo Game.

Mrs J and I supplied Munckins, Qwirkle and for an interlude game, Zombie Dice.

The playing order was decided by working out how much concentration was required for each game and putting the hardest thinking game last.

Each player would be awarded points dependant on where they finished. First placed would be awarded 10 points, second place 8 points, third 6 points, fourth 4points, fifth place 2 points and finally sixth place was awarded with 1 point.

Mr S also supplied caricatures based on each persons ‘gamer tag’ and favourite films. These were to come in handy for Munchkin! 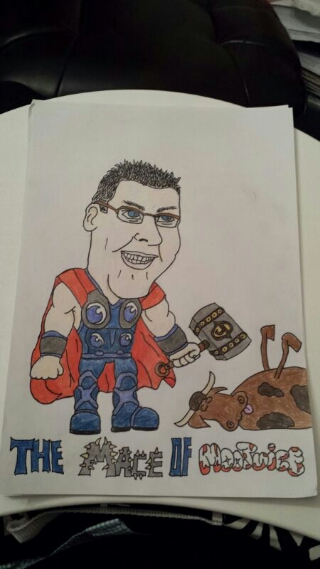 After all gamed were played Mr S was the deserved winner, he was leading most games, if he was not winning he was certainly up there!

In the mid field Mr P, Mrs H, Mrs S and myself. 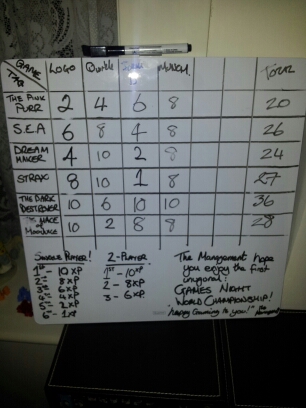 All in all it was a very enjoyable evening where we were able to introduce a different take on tabletop games to our friends.

The best bit about the evening was a text from Mr P who was researching different games.